It is a massive 5,895m tall and the highest free-standing mountain in the world. Everest is much higher overall but it starts at about 4,000m.

Even with these awesome credentials, you can leave work on a Friday, climb to its summit and be back at work a week later. And more than anything this accessibility is what makes it so popular. So book your Kilimanjaro climb now with the number one Kilimanjaro operator. If you climb with us, you are in safe hands – we have now helped over 10,000 climbers summit successfully.

WHICH IS THE BEST ROUTE TO CLIMB KILIMANJARO?

Having helped over 10,000 people climb Kilimanjaro we know that for every one of them, the best route was the route which gave them the best chance to stand on the top of this awesome mountain. So there are just four routes up Kilimanjaro that we recommend: the Machame Route, Lemosho route, Rongai route and the Northern Circuit.

MACHAME ROUTE | This is our favourite route for a short climb as it offers a high chance of success over just 7 days. It has an interesting approach through all of Kilimanjaro’s diverse climate zones. Its downside is that everybody likes it, so in peak periods it can be very busy.

LEMOSHO ROUTE | Stepping up in cost and adding an extra day, this is the best 8 day route on the mountain. It has fantastic views and a really interesting approach from the West of the mountain.

NORTHERN CIRCUIT | If money and time are not an issue then it is worth checking out the Northern Circuit. It has the same attractive approach as the Lemosho but then heads North where you will find yourselves nearly alone.

RONGAI ROUTE | This route approaches Kilimanjaro from the north of the mountain close to the Kenyan border.  It is a very quiet route, and is not normally our first choice as there is very little vegetation as it has much less rainfall. This means it is a good route to choose in the rainy season and it is always generally quiet.

When is the best time to plan Kilimanjaro climb ?

The short answer is to either go between May and October, or December and March. You can read lots more about the weather on Kilimanjaro here.

Of course, most people want to climb when it is dry, so if you choose one of these two periods you can expect to meet a lot of other climbers. To mitigate this, choose one of the less popular routes. The Northern Circuit is a great choice at this time of year. If you want to climb when it is quieter, or during one of the rainy seasons, then look at the Rongai route.  It lies in Kilimanjaro’s rain shadow and is much drier all year round.

When to go if you want to go on safari

If you have a few extra days then going on safari after your climb is a great option. Tanzania is great for wildlife and is a perfect place to see the Safari Big 5. There are different times of the year that are best for certain safari experiences. For example, if you really want to see the wildebeest migration in the Serengeti, then the best time to visit is February or March.

There is more advice on when to go on safari here. We run a schedule of open group climb and safari packages on the Machame and Lemosho routes throughout the main climbing season.  If you prefer a private safari then just contact one of our team. 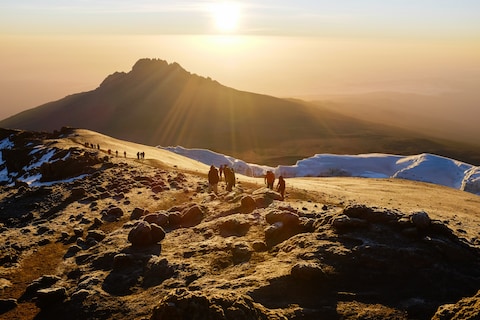 Some people really want to climb Kilimanjaro under a full moon as it means it is much lighter on the overnight hike to the summit. If that is what you would prefer the full moon dates are above.  Again, you shouldn’t be surprised to find that full moon dates are busier than other times of the month. And for astronomers, the full moon means almost zero stars and the night sky on a new moon is really spectacular.

One last thing you should consider when deciding when to climb Kilimanjaro is the cost of your flights. These vary a lot during the year and if you choose your dates carefully and book early you can often save  £300-400.

For experienced climbers, Mount Kilimanjaro will take around 5 to 6 days to reach the top. But it is important to understand the while the trek is shorter than others, the length of the trek doesn’t mean it is any easier. In fact, Mount Kilimanjaro is incredibly difficult because of its short trek.

You ascend rapidly up the mountain, which means your body needs to acclimate to the changing conditions very quickly. Thus, can lead to acute mountain sickness and if you aren’t prepared for that, you can have to turn back to get help.

With an average of half of all climbers suffering from acute mountain sickness, Kilimanjaro is classified as an extreme altitude mountain trek. Because you scale the 19,341 feet, or 5,895 meters, so quickly and the angle is so great, you will need to prepare and train before attempting the climb.

Is It Hard To Climb Kilimanjaro?

On average, it takes eight hours alone to reach the summit on the last stage of the trek. This is because it is 4,084 feet or 1,245 meters of climbing at extreme altitudes over 18,000 feet and greatly increasing your risk of getting acute mountain sickness.

How Difficult Is It To plan Kilimanjaro climb

If you are properly prepared for altitude sickness and know how to combat it, the trek up Kilimanjaro is relatively straightforward. If you don’t properly prepare your body for the altitude, you can come down with acute mountain sickness and have to turn around and head back to the base. But otherwise, the trek up Kilimanjaro is relatively easy with multiple routes and designated spots to camp and rest.

The actual trek up Kilimanjaro is very straightforward and requires little climbing skills. This makes it an ideal climb for people of different ages and skill levels, provided that they prepare for and prevent altitude sickness as much as possible.

Do you think to Plan Kilimanjaro climb Difficulty?

The actual to plan Kilimanjaro climb is less like your standard mountain climb, and more like a hike. But while easier in terms of climbing skills, you can have just as much difficulty climbing Kilimanjaro as other, more complicated climbs. This is because of the higher altitude and greater risk of acute mountain sickness.